You Had me at "Moon Colony"

Okay, I admit I was less than happy with Newt Gingrich as the potential Republican presidential candidate. I heard a lot of complaints that he wasn't a "real" conservative, that he had some problems with morals, that he had ethical problems and that he didn't get along with members of his own party.

It didn't quite match the "get 'er done" Speaker of the House I remember from his years in the House during the Clinton Administration. It doesn't quite match the in-your-face bulldog I've been seeing in the debates. Then last week when a Romney acolyte complained that Newt was a "loose cannon" and didn't get along with the Republican leadership, it was a bridge too far.

I kind of like it that Newt makes those guys nervous.

Also, several of my favorite Republicans have endorsed Newt, including Sarah Palin, Herman Cain, Rick Perry and Fred Thompson. Can you imagine if Newt put them all on his cabinet? Wowie-zowie!

Finally, during the debate, Newt said we ought to go for a moon colony in the next decade or so. I admit it, I'm a space junkie. I love the idea of building new spacecraft, space stations, landing on the moon and exploring the solar system. I suspect that Newt would encourage private enterprise to lead the way. That would be exciting.

But Newt had me at "moon colony".  Unless someone else makes me believe they would push the space program forward, I'm afraid the Newtmeister moved to the top of my candidates I find least objectionable. 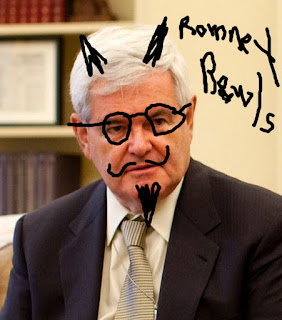 One of the Romney accolytes today made a statement on Fox News that was supposed to show us that the Newtster wasn't a good choice for president.  He said something to the effect that when Newt was Speaker of the House, he was considered a loose cannon by the Republican Leadership because he wouldn't "cooperate" with them.

How cool is that?

And the comment led to a follow up question by Fox asking why folk should think Romney was a conservative when he voted for both Jimmy Carter and Walter Mondale against Ronald Reagan.

You know if Romney's supporters keep it up, they're going to do for Governor Romney what Ron Paul's supporters have done for the Congressman.

Can you say "single digits", boys and girls?

Corporations Are People Too.....?


Bill Moyers demonstrates once again that he is not an unbiased journalist. In the attached vid, he encourages citizens to oppose the Supreme Court decision in the Citizen's United case, the one that established that free speech extends to corporations.

The case was over an unflattering documentary about Hillary Clinton that the Federal Election Commission wanted to ban during a senate election cycle. (Thank you McCain/Feingold by the way.) The court ruled FOR free speech and in support of Citizen's United. It did add that there had to be proper disclosure if you're going to say unkind things about politicians. I rather wonder if that's the part of the Supreme Court decision that's what all the hoo-rah is really about. Perhaps when folk like George Soros pays for vids and ads that say nasty things about Republicans, they would prefer not to put their names on it. After all, folk like Soros and Warren Buffet are, themselves, "evil corporations" (or "good corporations" if you're making a nasty movie about George Bush.)

Moyers thinks we need an amendment that says corporation can be muzzled because they "aren't people". So Move-On.org is people and Citizens United is not? I have no problem with Moyers being a leftie. Just would appreciate it if the wouldn't keep telling folk he's an unbiased journalist.

Maybe there should be an amendment about that.

Warren Buffet's Been Working on the Railroad

Here's Warren Buffet Singing "I've Been Working on the Railroad" on Chinese TV.  How appropriate is that?  Warren's buddy, President Obama just effectively canceled the Keystone Pipeline Project.  This means the Canadians will build a pipeline to the west coast and sell the oil to China - that or ship it south on the Burlington Northern & Santa Fe Railroad.  Wanna guess who owns it?


Warren Buffet's Berkshire-Hathaway group owns big old chunks of BN&SF Railroad - the railroad that will have to carry all that Canadian oil now that the Keystone Pipeline isn't happening. It only cost 126,000 direct and indirect jobs and adds to the cost of transporting oil to the US.

No wonder the Warrenator doesn't mind paying a little higher tax rate. He just got the job of transporting all that Canadian crude at $2.50 a barrel (almost twice as expense as the pipeline's $1.50 a barrel cost). Doing the little, "Lets us filthy rich folk pay some more taxes!" shuffle-dance for Mr. Obama got him huge new profits.


It's like the president's state of the union speech. It sounds good, but when you lift up the rock there's all sorts of nasty stuff under there - like Uncle Warren's Sweetheart Deal.

And guess who gets to pay for Uncle Warren's windfall?

Yep, you guessed it.. Back up to the pump Americans and bend over. Uncle Warren is definitely workin' on the railroad.

How is it that every time the Dems start wailing about not taxing the rich, the next thing they do is make some sort of shady deal that helps the filthy rich who donate to their campaigns make massive potfuls of money. They push through this big old bailout and the bankers and CEOs were suddenly getting solid gold parachutes, and all the while the little guys that owned stock or had accounts with them were getting stiffed, not to mention the taxpayers. When you've got people like Bernie Madoff as an "A-List" Democrat, it makes you kinda wonder just how sincere the folks who invented the tax loophole are about soaking their rich patrons.

I got snagged by the old political bait and switch this morning - TWICE!

I know, "One time shame on you. Twice shame on me!"  But dang it I can usually trust Glenn Beck and he let me down today.

First, I spotted an article by Lew Rockwall, a blogger whose stuff I'm not terribly familiar with - apparently he rights NY Times Bestsellers about things collapsing or the evilitude of the Fed or something. Anyway, it turns out the whole piece was about how Romney was terrible and the only one who can save us is mild-mannered Ron Paul who, if we'll just slip into our little voting booths will turn into President Ron (strange creature from another planet?)

It's a really dirty trick making me read another Ron Paul commercial, especially after the first 400 or so didn't do anything for me. Really. Say what you mean, okay.

Then to my surprise, I got a Glenn Beck e-mail today saying Beck was endorsing Newt Gingrich. Now I thought Beck was pretty much anti-Gingrich, so I clicked over to see what was up. It turned out to be a joke and a surprisingly nasty series of attacks on former House Speaker Gingrich that pretty much turned into name-calling.

Now, name-calling is one of those things that I don't see any use for, although I do admit to referring to some of the kookier Ron Paul supporters as Paulestinians, Paulistas, Ronites, Ronians or in the case of one odd little guy who keeps sending me cryptic e-mails, Zondar the Ronulan Ambassador. I figure with those guys, it's give as good as you get and besides they're really hacking me off.  With most folk, I don't exchange nasty names, however. It's just not nice.

As much as I dislike President Obama's policies, I try to call him by his proper name and title. He is, after all, the president. I disliked the disrespect leveled at Reagan and the Bushes and believe the President should be treated with the respect due the office. Criticize his politics if you wish, but nasty names are out of place.


If Ron Paul does get himself elected, I will call him Mr. President till the day Zondar the Ronulan makes contact with the mother ship and it sets down on the White House lawn to conclude the first interstellar peace accord in history - probably something like, "We won't invade your alien worlds if you'll promise not to death ray us and make zombie slaves out of us."  We'll call it the "Niceness Accords".

If the little green men will just take Zondar and his minions away with them when they go, the aliens and President Paul will have done us all a great service.

In the meantime does it bother anyone that only three tiny states have held primaries and we've already lost most of our candidates?  Trouble really is, that the four we have left, nobody seems to want!  By the time we get to vote in a primary it'll be like scraping through the leftover tomatoes at the end of Farmer's Market day looking for an unbruised one.

Tom King (formerly of East Texas)
* And I do know that using a Ron Paul picture draws the Ronians like moths to a flame and that it is a just plain sneaky way to drive up pageview numbers and ad revenue  on my website and also that it's a dirty trick to play on the Paulestinians, but as they say in Vegas, "C'mon, mama needs new shoes......!" and low-rated bloggers live on advertising.
Posted by Tom King (c) Monday, January 23, 2012 No comments: Links to this post