Ron Paul has for some time been rolling up the anti-Semitic vote with his libertarian flavored stance on Israel. Dr. Paul states clearly that he is not anti-Semitic and I believe him, even though he has done a fairly poor job of distancing himself from his overtly anti-Semitic supporters. I don't think he's an actual anti-Semitic. I just think he's wrong on Israel.  Dr. Paul has kept his chastisement of his lunatic fringe following to the gentle side. He is careful not to offend the conspiracy theorists and anti-Semitic in his legions lest his poll numbers drop by half. What politician would bite the hand that feeds him after all?

And Dr. Paul is, after all, a politician. Paul's actual vote-getting numbers in the primaries so far have puttered along in the 9% range no matter what the polls or Paulestinians might say. He's done better than Newt Gingrich in a few places, but unlike Gingrich has not won a single state.

I am puzzled as to why this makes sense to ANYBODY, but then, I have a bad habit of reading history. The wave of Muslim immigration to this country has been largely from areas threatened, not by evil western imperialists, but by brutal middle-eastern regimes like those of such lovable tyrants as Assad, Quaddafi, Saddam Hussein, the Taliban and their ilk. It really doesn't make sense for a refugee, after he or she escapes persecution, poverty or whatever else drove them to leave their homeland, to come to the US and then turn around and oppose efforts by the United States and its allies to stop the very people who committed violence and oppression against them in the first place. It seems illogical at the very least and wondrously selfish at worst to say, "I got out, but screw the rest of you people back home."

If the Ron Paul people are counting on some level of Muslim antisemitism to drive the Muslim vote to Dr. Paul, that's just shameful.  Ronald Reagan showed that you win presidential elections by appealing to the best in people and not the worst. Unfortunately, that's precisely what some Paulestinians are doing in the Muslim community - poking the antisemitism beast hoping to garner votes for their boy and again confirming my opinion that there are a lot of folk in the Ron Paul camp who are only in it for the legalized pot.

Me, I'm looking for a candidate that would like to see a peace in the middle-east that doesn't involve one side killing everybody on the other side. That does NOT look very much like the Ron Paul plan to me. I don't think stepping back and letting radical Muslim nations drive Israelis into the sea is going to give us peace - only a little quiet before the storm.

How about you?  Scream at me from the comments box.  I can take it.

* The photo above is a Photoshopped caricature (I can't draw worth shucks) - as far as I know Dr. Paul never wears a turban, even while campaigning in Detroit!

The IRS Thinks Something's Sinister at the Tea Party? 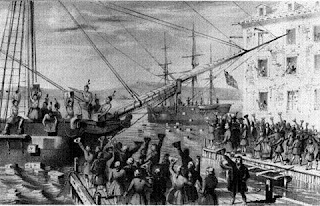 Media pundits, political operatives and the Obama Adminstration keep trying to "discover" something sinister going on with the Tea Party. Now the Nonprofit Quarterly's Rick Cohen gets into the act, reporting gleefully that the IRS is going after the Tea Party.

First, there is not a "Tea Party" so far as a national organizations goes. The Tea Party is a loose collection of individuals who share a desire for smaller, less intrusive government (not nonexistent government as Mr. Cohen snarkily suggests). Many Tea Parties are only organized in the sense that some guy made T-shirts and we all bought them with our own money and showed up at a park to rally for a specific candidate. We communicate by bulletin boards and websites that some of us donate money to in order to pay for the hosting charges.

NPQ's Cohen is rather tickled that the IRS is going after the Tea Party.  The IRS is going to be monumentally disappointed after it spends all that money trying to find out where the Tea Party is making money off the Koch brothers or whatever conservative bugbear they and the left believes is funding the whole thing. The administration and its allies on the left can't seem to imagine that regular raggedy people like me would care about politics without being paid to.

I spent 30 years in the nonprofit industry helping raise millions of dolllars for small nonprofits that couldn't afford to pay me to do it. I was always the development director AND something else that took up most of my time. And there's a reason they called those agencies "nonprofit". I'm 57 and have no retirement, no savings, no home and no health insurance. If I get sick I either pay for it or die and that's okay by me because I chose to do what I did. I worked with seriously troubled kids, many with disabilities on top of abuse and mental illness, adults with physical, mental and developmental disabilities, seniors with age-related disabilities, preschoolers with learning disabilities and the 1 in 5 citizens in East Texas who cannot drive due to age or disability. I started an independent living center for people with disabilities. I worked for six months to write the grant, organize the board, raised nearly 2 million dollars and then gave the organization over to people with disabilities to run and walked away to work on transportation issues. I worked side by side with conservatives and liberals to create fair funding for transit across my state, testified before the state legislature and was warned to check under my car before starting it because I was messing with somebody's "deal".

And, largely because of what I saw in government and quasi-government agencies, I am a Tea Party Activist. I've never received a cent to show up at a rally nor has anyone I know of. We all pay our own way, make or buy our own signs and T-Shirts, volunteer to organize and bring food to rallies. How the hell is the IRS going to tax that. The Tea Party where I'm from only exists when a bunch of us come together to howl. The only real way you can tell what we think is to ask us and pollsters do.

We've learned a bit about community organizing from the left. We kept some parts and pitched the other, less savory bits. NGOs and government officials kept asking me what I was trying to get out of the transportation advocacy I was doing. I told them nothing, but they didn't believe me. They kept telling me I couldn't get any grant money. I kept telling them I didn't want any. I wanted fair funding for East Texas rural transit - two very political Democrat leaning district were taking 60-75% of all the rural transit dollars. My group took them on head-on. I was attacked verbally, reviled and appointed to the Public Transportation Advisory Committee for my state by the governor. We got the job done, but it was because we all worked together to do it - progressives and conservatives. We just had to figure out that we wanted the same things, only disagreed on how to do it. Once we figured out what we all wanted, it was easier to figure out how to get it.

When we were done, we didn't organize a nonprofit to do something we no longer needed done. We just let our legislature know we'd be back if they messed with East Texas again. It was my introduction to the kind of real community organizing that led to a Tea Party organizing in my neck of the woods.

My tea party associates help fund charitable organizations all over the region. They are neighbors, friends and decent people. I really resent the implication that there is something sinister going on with the Tea Party. I know well what they charge for helping the nonprofits I've worked with - $0. So, I do get a bit impatient with folk who complain because some mega-corporation's CEO gets a bonus that's bigger than their salary when they've chosen, of their own free will, to work for a nonprofit organization, knowing full well that it's a "nonprofit". I agree that the laborer deserves his hire, but to complain that they are not making what someone who has dedicated his life to making money is rather disingenuous.

The angst among left leaning politicians and career nonprofit managers over taxing the Tea Party reminds me of my Uncle Bob, who once borrowed his son's electric car. He called home from the gas station frustrated. "I've circled this thing have a dozen times and can't figure out where to stick the gas nozzle in."

The IRS is going to have the same devil of a time figuring out how to tax Tea Parties as the British did trying to find the "Indians" who threw all that tea into the bay.