The Five Woes, Beck and Limbaugh 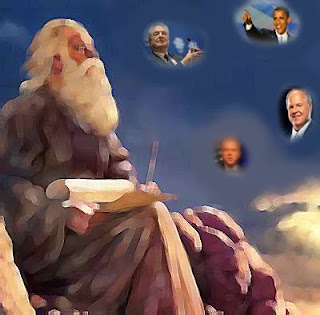 A friend of mine complained recently that God had forgotten to mention the United States in prophecy and could not understand why.  Well I can tell you.  He didn't forget. It's there if you'll read it without the convoluted attempts by theologians to hide what the prophecies really have to say.

Take Habakkuk. Habakkuk's job was to warn the Israelites that a conqueror was coming that would sweep over all and punish God's people for drifting off to worship idols.  Now this was a big deal because idol worship in those days meant more than wearing one glove and a Michael Jackson t-shirt.  The worshipers of Baal and Molech caused the deaths of tens of thousands of worshipers annually about that time - mostly newborn infants in Molech's case.  You can understand why God was sending a punisher.  I believe he's doing it again.  God gave us the United States as a refuge for Christians and other persecuted peoples.

But now we're messing it all up and I believe the punisher is returning, not because God wants us punished, but because since we have taken ourselves out from under God's protection, that's what happens. The old dragon is an opportunistic demon and he's working up to something big, you can feel it in your bones.

Habakkuk in chapter 2 describes what is coming and warns us we'll have to live by faith during this trying time. He describes the coming usurper as a proud man who cannot be satisfied, but heaps up people and nations for his use.  Then in verse 6 Habakkuk describes the weapons that will be used against this power hungry person -  taunting, mockery and ridicule.  Almost as if Habakkuk were predicting the work of folks like Rush Limbaugh and Glenn Beck who use humor to combat the rising tide of socialism in this country.

Habakkuk lists 5 Woes which describe the tools and methods the conqueror will use to overcome us.


Woe #1:  Credit
This passage (vs. 6-7), says he will amass wealth by taking it from others and by borrowing it. The passage predicts the creditors grow impatient and will rise up and plunder us. China is watching us with hooded eyes even now.

Woe #2:  Greed
The prophet next says greedy men would seek to protect their wealth by building up high. They will build a safe nest for themselves while lying to and exploiting others. They will work hand in hand with the conquering power while betraying their own in order to secure the safety of their own nest all the while lying to their own families (Supporters?  Followers?  Nations?)  Anybody ever figured out how George Soros, the champion of the new socialism, made money while breaking the Bank of England? Want to bet that he and his ilk have "built their nests on high"?


Woe #3:  Corruption
Here those seeking to enslave the nation build a government on corruption and violence and oppression. There is hardly a single case where a fully socialist government has not used oppression to control its people. Habakkuk also predicts that the Word of the Lord would go to every corner  of the world - as though he'd seen TV, radio and the Internet coming to counter the foe.


Woe #4: Substance abuse and lust
The next woe predicts enslavement through alcohol, drug abuse and lust (pornography?). Those addicted to these practices will be easily enslaved by a conqueror that promises to not only protect these vices, but to remove the shame associated with these deviant behaviors by making them common practice.


Woe #5:  Idols
The final warning predicts cults of worship around empty symbols. Is it a surprise that one of the top TV shows in America is "American Idol" or that we see blind, cult-like worship around a political figure like this  President, not only by individuals of his party, but by news reporters who extol his virtues while experiencing tingles running up their legs at the sound of his voice.


Habakkuk prophesied with stunning accuracy, the things that would take down our country.  In the next, chapter, however, he says this:


16. When I heard, my body trembled;
My lips quivered at the voice;
Rottenness entered my bones;
And I trembled in myself,
That I might rest in the day of trouble,
When he comes up to the peopoe,
He will invade them with his troops.
17. Though the fig tree may not blossom,
Nor fruit be on the vines'
Though the labor of the olive may fail
And the fields yield no food';
Though the flock may be cut off from the fold,
And there be no herd in the stalls -

18. Yet I will rejoice in the Lord,
I will joy in the God of my Salvation

Have courage, friends.  Do not fear.  Though the worst may come upon us, we are still his children and the God of Abraham, Isaac and Jacob will stand for us to.
Does anybody besides me get a thrill watching the news and seeing all the terrible things predicted by the prophets coming true before our eyes?  It only confirms that God has already seen the end and is watching out for us.  Besides, it also means we're going home soon.
How cool is that?
Tom King - Tyler, TX
Posted by Tom King (c) Tuesday, May 18, 2010 No comments: Links to this post