Apparently some American hackers have re-discovered their patriotic gene. North Korea is being hacked!  :-o

Despite our collective wish that the president might have discovered his own inner tough guy, it's unlikely that the US government is taking North Korea offline (at least not with the president's blessing anyway).  Some members of the press are expressing fear that such a retaliation might set a dangerous precedent. This confuses me. Are they advocating that we set the no less dangerous precedent of allowing attacks on our infrastructure to go unanswered?

Might as well paint a target on ourselves and invite the world to take out its frustrations on us. That would be a very Obama-like position to take, though, in the wake of the president's World Apology Tour. 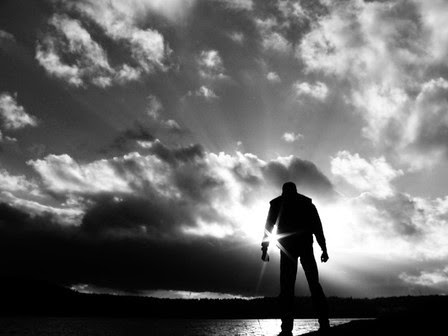 God is in his heaven and all will come out as it should.

It is important to believe this if you believe at all in God for the devil your adversary will hound you as long as you place your faith in God. Once the devil has got you, he may leave you alone or he may destroy you for the fun of it, but until the devil has taught you to worship yourself, he will never cease to come after you. God on the other hand leaves you your right to choose. He doesn't hammer you into submission. And he promises to make it all come out right in the end.

To take the name of Christ - to call yourself a Christian - is a momentous thing.

If you're not serious about it, you'll be better off becoming a Crip or a Blood or a Rosicrucian. Sign up with the Illuminati if you're looking for success and can find a recruiting office. Become a communist or a Democrat (one of those who hissed and booed at the mention of God during their last convention). Be anything but a Christian. Don't join up with the body of Christ if you're still looking for power, wealth and influence in this world. Don't sign up if you don't intend to treat others the way you want to be treated or to obey the commandments to the best of the ability God gives you.

Don't embarrass the rest of us.

The truth is that if you don't love God with all your heart and your neighbor as yourself, you're probably giving us all a bad name. God, Himself, says you'd be better off cold than lukewarm toward Him. If you're cold, you may be convinced you need Him and surrender your heart into His hands. If you're lukewarm you think you're pretty good and don't need anything. Jesus said about those kinds of people, "They have had their reward."  In other words, you might as well pat yourself on the back. Nobody else will.

We listen for the still small voice.

There's something about taking to your knees once in a while and asking for a reboot. Like computers, we humans accumulate bits and pieces of stuff in our minds and hearts that collectively slow us down and make our behavior buggy. Prayer time is a kind of reboot that flushes the system of all that unexamined nonsense that floats around in our brains and allows us to start over with a clear head. By making every day a do-over and trusting that God will work it all out for the best in the end, Christians become some of the most resilient, stubbornly decent people in the world.

How cool is that?