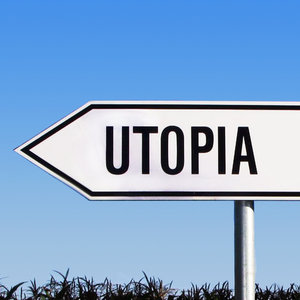 Liberals have always wished for a world in which poverty did not exist and, God bless ‘em, they actually believe it’s possible.

It is not. Jesus said that the poor would be always with us in this world. That’s because, so long as men lust for power over their fellows, there will be inequity.

The great liberal error is the belief that secular power can be wielded to force society to be kind and merciful and fair - that Utopia can be had by legal pronouncement.

Unfortunately, power corrupts, however much the left wishes to believe that it does not. By limiting the power of the new American government over the daily lives of its citizens, our founding fathers created an economy in which, not only was success possible, but also one in which success was more probable than virtually anywhere else in the world.

I remember when I was 4 years old I had a train set. My mother forbid me to plug in the transformer myself. One day I asked her to plug in my train set, but she was watching “As the World Turns” and told me to wait till it went off. I didn’t want to wait, so I grabbed the plug firmly with my index finger between the prongs and plugged it into a wall socket.

There was a loud pop, the lights flickered and Mom found me on the floor sprawled across the train tracks wondering who I was and why I'd been born.  I learned that day, the danger of putting too much power in the wrong hands.

Knowing politicians as we do, is there ANYBODY that truly believes that putting more power in their hands (what with their collective track record) is a good idea? Does anyone believe that giving massive power over our economy, our medical care, our housing, our jobs or the education of our kids to this incredible collection of massive egos is going to result in everyone being elevated to equal status with our elitist overlords?

You can't create Utopia by declaring that you've created Utopia.  Utopia is only possible if it is peopled with perfect people. An Earthly Utopia will, therefore, never work. No amount of laws will accomplish it.  After all, Christ gave us one simple law - the Golden Rule. If we all obeyed it, there would be no more war, no more poverty, no more evil. What makes anyone think that adding a bunch of legal addendums to that one basic law will mean people are going to go, "Oh, that's what 'treat others the way you want to be treated' means!" and suddenly break out in goodness.

Won't happen. We're going to have to wait for heaven.  If you don't believe in heaven, then you're just waiting around trying to figure out how to make yourself relatively happy by grabbing your share before the whole thing goes to hell in the proverbial handbasket or you have a coronary and drop dead.

﻿﻿﻿
﻿﻿﻿ Here's what the sun's been up to this summer. Anybody wonder why the unusual heat? Hint - it's that big danged atomic heater at the center of our solar system.....

This summer, the sun got jiggy with it and ejected a whole shipload of very hot plasma.

So...................
This summer's heat and drought is probably not your fault for driving your kids to soccer practice in the family Ford Explorer.

If the globe is warming and you can't figure out why, try going outside around noon, stand in an open space and look straight up.  That bright lighte is monstrous semi-controlled atomic explosion, bubbling away up there, pumping out heat and light. Sometimes it gets hotter, sometimes cooler. As of yet, the National Oceanic and Atmospheric Agency has yet to discover where God put the thermostat.

From an original comment posted on Nonprofit Quarterly:  by Tom King (c) 2012

I didn't mean to disparage the article when I used the term "gloating". The article was fairly balanced for NPQ, though the headline was not.  Nor did I wish to get into a debate over semantics, which is what this whole thing is about in the end.

As Rush Limbaugh opines on a regular basis, "The law is a teacher." The LGBT folk, in insisting that same-sex alliances, be not only legalized, but called "marriage", have recognized this principle. Let's face it, the reason for their insistence that it be called "marriage" and not some sort of "civil union" is because they hope to teach our society that same-sex relationships are no different from traditional marriages. For conservative Christians, it's an attempt to legitimize what they believe to be a "sin" by simply renaming it.

Not that there is not already plenty of that going on, just not that many sins get canonized into law. Suppose a law were to be passed that redefines robbery as something else, like, say, "redistribution of wealth". Suppose we decided to call lying something else, like say, "political speech". We've already lost the redefinition fight over "adultery" and "greed" (now called "true love" and "good business"). Seems a shame to plant our flag over gay "marriage", after letting the rest of it slide.

Ah, well, I suppose the whole thing is a lost cause. The Bible does say some pretty bleak things about the condition of the world at the end of time after all. The confusing thing is that while we've learned a lot as a culture in America about the Golden Rule, we seem hell-bent to legislate any other form of morality out of existence. It seems like everybody's got a favorite sin they'd like to get made legal. While I have no problem with people committing all manner of sins so long as they aren't committing them against me, it does bother me to be villified for believing something is wrong that I know to be wrong. We should be careful about that.

The pro-Eugenics crowd in the early part of the last century attempted to create laws that would alter long-held beliefs about who had the right to live and who did not. Legislating morality is always a dangerous business. One of the reasons I like the English language is that there are so many different words in it, that you can always find a precise term for everything. Co-opting an existing word for other purposes tends to muddy the language, which is, of course the point of calling a same-sex union a "marriage".

Shakespeare once wrote, "A rose by any other name would smell as sweet." Apparently, the LGBT lobby doesn't think so. Conservatives like me do.  Give LGBT couples the rights, but for heaven's sake, call it something else. The whole issue is a difference of opinion that should be debated openly. I hope it doesn't degenerate to dueling boycotts. This country is in tough enough financial shape without politics suppressing business.