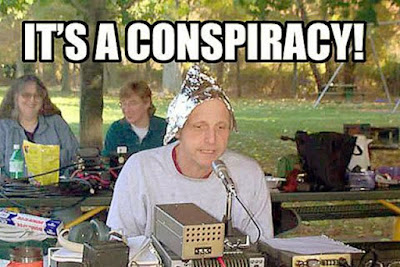 The Problem With Conspiracy Theories

Just went round with a friend over the chemtrails conspiracy theory. This theory has morphed through several phase as conspiracy theorists searched for a reason why airplanes high in the atmosphere leave vapor trails. As more and more planes take to the air, fly higher and mount engines that run hotter, they leave more and more vapor trails in the sky, which those who enjoy making people paranoid are using to some effect.
Conspiracy theories are supposed to be some kind of secret knowledge that only a few smart people are able to figure out. What they mostly do is bring out the arrogance in people convinced they are among the elite minds of our day. What conspiracy theories actually do is deceive, and I think this is more dangerous that if the theories were at all true. The point of a good conspiracy theory is to get people to (1) believe lies without examining them too closely, (2) divert their attention to actual evil being perpetrated in the world and (3) make them believe the forces of evil are more organized and powerful than they, in fact, are. Evil is out there, but the devil is not being quiet about it. If you look at evil, Nazism explained exactly what it would do in Hitler's book Mein Kampf, the communists, the facists and even the progressive have all clearly stated what they want to do to us in the name of control. In every case they wish to rig the governments of nations in order to control people. Even the terrible Masonic Lodge is a paper tiger when you come right down to it. A Southern Good Old Boy Network is in many ways a more powerful thing than a bunch of freemasons.
Chemtrails are a uselessly expensive idea. The point is to terrorize people into handing over power to government in order to save us all from global climate change - which is a preposterous idea. If they actually were to spray sulfates in the atmosphere and could stop global warming, they'd crow about it in every media outlet. Except they know the whole global warming notion is a fraud so why try to do anything about it. The point is to frighten people into believing this crap and handing over their freedom in exchange for feeling like they are virtuous and that somebody is actually doing something. If they fixed global warming they'd lose power.

The chemtrails hoax is a mysterious natural phenomenon looking for a conspiracy to explain it. Those who subscribe to the theory of chemtrails have been all over the map in ascribing a nefarious purpose behind high altitude jet contrails.  They've speculated that the purpose for commercial airline companies to risk gigantic class action lawsuits for doing it was everything from solar radiation management, weather modification, psychological manipulation, human population control, or biological or chemical warfare. Now they are saying it's climate control and Bill Gates is behind it. They cook up stories and statistics that show that chemtrails are behind every sort of  respiratory illness and any other likely scary health problem that can be stuffed into the narrative that some evil organization like SMERSH or SPECTRE or HYDRA or the Republican Party is trying to do us harm.
The people behind the frenetic spread of these hysterical conspiracy theories join the gullible lemming hoard because it makes them feel special. Those who inspire belief in such theories see themselves as being the movers and shakers of history and their confidence in their own hubris helps encourage conspiracy theories. In fact, the apparent shared mission of so many powerful people and organizations is not any sort of super-intelligent organizational effort. It's simply shared lust for power. The wealthy elites desire power for fear the masses are going to someday rise up and murder them in their beds. They see a road to power and control and they are all crammed onto it, riding like fury to their own destruction. It's a case of a common desire shared by people who are looking to protect themselves rather than depend on God to work all things together for good in their lives.
The devil wishes to create the illusion that humans can be in charge of history. It reminds me of a scene in the Disney animated movie Robin Hood, where a bunch of rhino soldiers charge into a bunch of tents and the sheriff of Nottingham and Little John wind up on top of the tents charging back and forth atop the rhinos totally out of control.I suspect the devil is laughing at those who think they have it all figured out and are going to seize for themselves the power they need so they can ditch God and forge their own destinies.
Progressives and their ilk (and I include the whole "united religions" crowd in that bunch) have seized on a narrative they think will scare the most people and now they have the proletariat charging off a socio-political-economic cliff to their own destruction. Human leaders have sat themselves atop the pile and once fancied themselves to hold the reins of power. About now, many are beginning to realize that they aren't steering anymore - that there is no steering wheel, no reins, no rudder. Democrats, for instance, thought they controlled the whole impeach the president process when they started it, but it's rapidly spinning out of control and I do believe Lucifer is enjoying their discomfiture.

The devil has taken many dry runs at destroying mankind - the Civil War, WWI, WWII, Korea, Vietnam and the Mid-East wars were all dry runs, each and experiment leading to more and more devastation. The precursors are always the same. What Satan is running up to is a combination Civil War, World War, Genocide and global tyranny. If you examine history closely, you'll see he keeps trying the same techniques over and over. They fail, but Lucifer is every bit as deluded about the efficacy of his strategies as any modern progressive. It should work they say, because it feels right. That was precisely what the whole rebellion in heaven was about. Satan argued that free will is a mistake. Satan's case was that humans should not have free will. It would make them too much like God and that would jeopardize his own position as number 1 created being. Satan cares not about the human elites he's deluded into believing they have some kind of control over the course of history.. That ship sailed millenia ago. Now it's all chaos and conspiracies and the truth is if half these conspiracy theories were true, the various plots would cancel each other out or at the least blow up in the conspirators' faces. 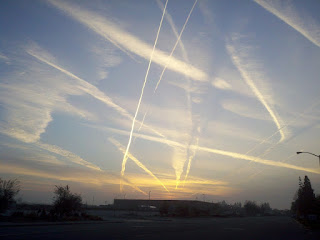 Chemtrails are just a BS distraction. A song back in the 60s had a line in it that went, "Satan, Satan is my name, confusion is my game." He's working both ends against the middle and chemtrails, big pharma, vaccine hysteria - all of it is designed to teach people to believe a lie. It feels like you have some sort of secret knowledge that makes you smarter than everyone else. It plays to people's vanity and sucks them in and makes them feel superior to the rest of us rubes.
I'm sure many of my conspiracy theory aficionado friends are feeling quite superior to me right now, being as they are, in possession of secret knowledge. But Truth doesn't make you feel like that. If what you believe makes you feel smug and superior to everyone else, you're probably embracing something other than the Truth.